Everything You Should Know

Distracted driving remains a central issue to driver safety on America’s roads and highways – but despite our attitudes against the dangerous act, we still continue to engage in acts that regularly take our attention away from the road.

just how pervasive is distracted driving in the united states?

This extensive list of distracted driving statistics, facts, and figures aims to answer that question.

Every day, approximately 9 people are killed and more than 1,000 are injured in auto crashes involving a distracted driver. (cdc, 2017)

Even though the risks are clear, a recent survey found that a whopping 88% still use cell phones while driving. 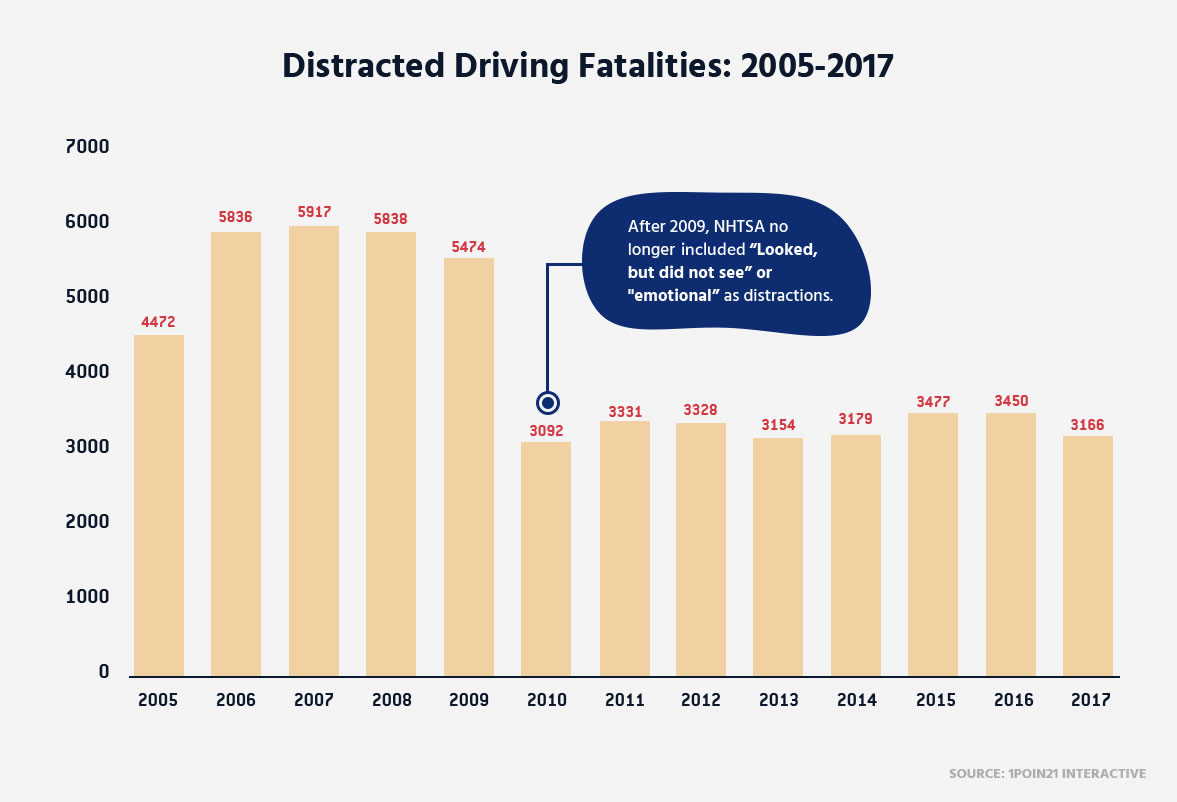 Between 2005 and 2017, NHTSA data states that 53,714 people were killed as a result of distracted driving accidents.

However, fatal crashes are only a small fraction of total distracted driving accidents.

While the NHTSA did not release total accident data involving distraction in their latest report, they did release it for 2016. According to 2016 NHTSA distracted driving statistics there were 319,000 distracted accidents that resulted in injury and another 681,000 crashes that resulted in property damage only.

Between 2011 and 2016, these estimates work out to 1.71 million distracted driving injuries and 3.73 million property damage accidents.

What are American drivers’ attitudes toward distracted driving?

According to a 2018 study by the American Association of Automobiles on traffic safety, distracted driving is an important issue for drivers – but their words don’t match their actions.

However, at least once in the past 30 days:

What is Distracted Driving?

Distracted driving refers to the act of driving while engaging in any other activities. This includes any act that is taking your attention away from the road, even if only for a few short seconds.

There are three main types of distractions:

Impeding your vision or taking your eyes off the road

Taking your hands off the wheel

Taking your mind off your driving or the road

Many instances of distracted driving are a combination of one or more types.

Texting while driving, for example, is especially dangerous as it combines all three types (visual, manual, cognitive) of distraction (Vegega, Jones, & Monk, 2013). When you send or read a text message, you take your eyes off the road for about 5 seconds – those few seconds are long enough to cover the full length a football field if you are driving at 55 mph (NHTSA, 2019). Clearly, diverting your attention away from your driving can have dire consequences and greatly increase your chances of being involved in a motor vehicle crash.

According to The National Safety Council, cell phone use while driving leads to 1.6 million crashes every year. They estimate nearly 400,000 people were injured in 2015 due to distracted driving. Dialing a phone is one of the most dangerous distractions. A study by the Virginia Tech Transportation Institute (2016) found that dialing while driving increased a driver's chance of crashing by 12 times and reading or writing increased the risk of crashing by 10 times.Even with hands-free cell phone devices, talking hands-free still makes drivers much more likely to be involved in a crash than waiting until the drive is over. Using hands-free devices is still 4 times more distracting than talking to a passenger.

If you don’t engage in texting, using your cell phone can still be dangerous. Looking up directions to your destination or checking the traffic conditions while driving can also be incredibly distracting and extremely unsafe.

Twenty-five percent of drivers used a cell phone right before being involved in a crash.
(Chicago Tribune, 2017)

The bar chart below shows the distribution of the age of drivers in fatal crashes involving cell phone use in 2017.

According to the figure, drivers aged 20-29 had by far the highest incidence of cell phone use in fatal crashes.

Other Distracted Driving Facts You Should be Aware of:

Cellphones aren’t the only distraction facing drivers. Driving with children in the car, chatting with passengers, eating food, grooming, reaching for a dropped object, swatting at a fly – anything that takes your eyes off the road for even a second or two – is considered a driving distraction.

In a study conducted by the Virginia Tech Transportation Institute (2016), driver-related factors (i.e., driver error, impairment, fatigue, and/or distraction) were present in almost 90% of crashes.

It is also important to note that distracted driving in the U.S. may be under-reported because not only do many state crash report forms not have a specific field or code on their forms for certain types of distraction (National Safety Council, 2017), but drivers are often unwilling to report that the reason for their accident is distraction related.

According to the National Highway Traffic Safety Administration (NHTSA, 2015), driver distraction is a leading factor in fatal driver related crashes and occurs when drivers divert their attention away from activities that are critical for safe driving.

How many fatalities are caused by distracted driving every year?

According to the NHTSA, 9% of all fatal crashes in 2017 were reported as distraction-affected crashes, resulting in 3,166 fatalities due to distracted driving.

Men are more likely to speed, with 31.9% of male drivers reporting they engage in this behavior compared to 28.4% of female drivers who admit to speeding.

Friends In Car With Driver

Other Things to Consider About Distracted Driving

It is important to note that, despite these stark statistics about distracted driving, its impact on traffic safety may actually be under-reported. Many state crash report forms not have a specific field or code on their forms for certain types of distraction.

In minor accidents where collisions are usually self-reported, drivers are often unwilling to report that the reason for their accident is distraction related.

What can I do to minimize distracted driving?

In order to prevent distracted driving, the DOT recommends that drivers: